[UPDATE June 2022: A bill to legalize on-line sports gambling in North Carolina failed by a single vote.  Sponsors of the bill promise to revisit the issue in the General Assembly’s next session.]

Just three years ago, sports betting was legal in just three states.  Today you can bet legally in 33 states and the District of Columbia. The trigger for this nationwide gambling expansion was a 2018 U.S. Supreme Court decision striking down a federal law that had prevented states from legalizing sporting betting. 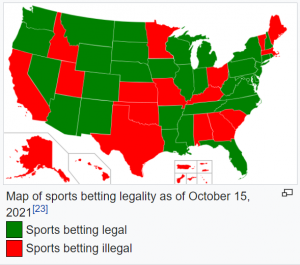 North Carolina first stuck a toe in the sports gambling pool in March 2021 when Harrah’s Cherokee Casino Resort accepted a bet on the Tar Heels to beat Wisconsin in the NCAA basketball tournament.  (Happily for this Duke fan, that inaugural bet was a loser.)

Sports gambling in our state is currently limited to in-person betting at two locations on tribal lands (the casinos owned by the Eastern Band of Cherokee Indians in Cherokee and Murphy) with a third (at the Catawba Indian Nation casino in Kings Mountain) opening soon.

The General Assembly has made most forms of gambling illegal across North Carolina with limited exceptions, the state lottery primary among them.  However, state laws are generally not applicable on lands held in trust for American Indian tribes by the federal government.  Under the Indian Gaming Regulatory Act of 1988, an American Indian tribe is authorized to operate a casino on trust land if the state in which the land sits authorizes them to do so and the tribe and the state enter into a regulatory and tax “compact” which is then approved by the federal government.

The state of North Carolina first entered into a gambling compact with the Eastern Band of Cherokee Indians (“EBCI”) in 1994, paving the way for the opening of Harrah’s Cherokee Casino Resort in 1997.  A second EBCI casino in Murphy launched in 2015. Following the 2018 U.S. Supreme Court decision allowing states to permit sports gambling, Governor Cooper and the EBCI negotiated a new gambling compact in late 2020 that authorizes in-person sports gambling at both casinos.

The Catawba Nation’s controversial plans for a casino in the Carolinas became possible in March of 2020 when the federal government agreed to purchase land in Kings Mountain, North Carolina and hold it in trust for the tribe. After overcoming legal challenges from the EBCI and obtaining federal approval of their gambling compact with North Carolina, the Catawba opened a temporary casino in July 2021 and began construction on a larger permanent facility.  The Catawba’s compact with the state permits both traditional casino games and in-person sports gambling.

North Carolina’s compacts with both the EBCI and the Catawba require payment to the state of a percentage of the “live table gaming” revenue (blackjack, roulette, craps, etc.) earned at the three casinos.  That percentage increases over time from 5% to 8%.

After allowing in-person sports gambling on tribal lands, North Carolina’s leaders now face a bigger decision: should they join 19 other states and permit on-line wagering across the state?  The neighboring states of Virginia and Tennessee recently took that plunge and each now take in nearly $3 million in sports gambling tax revenue per month.

Nationwide, tax revenues from states that permit only in-person sports wagering are far, far lower than those from states that permit on-line wagering. Compare New Jersey, which one was of the first states to permit on-line wagering after the 2018 Supreme Court decision, with New York, which currently offers only in-person wagering. Through August, New Jersey’s 2021 sports gambling tax revenues were nearly 100 times greater than those of New York. (See this site for tax revenues by state.)

How much tax revenue could North Carolina realize if the state permitted DraftKings, FanDuel or one of the many other on-line casinos (known as “sportsbooks”) to accept sports wagers across the Old North State?

A state’s tax revenue from legalized gambling depends on both the level of in-state gambling and the tax rate.  Nationwide, state tax rates for on-line sports betting revenue vary widely, ranging from 2.5% in Oregon to a just-announced 51% in New York . Most states are in the 10% to 20% tax rate range, including neighboring Tennessee (20%) and Virginia (15%).

These taxes are paid by sportsbooks based on their revenues (in other words, the money lost by bettors), not the total dollar amount of bets they handle.  For example, from January to August 2021 sportsbooks in Virginia handled $1.6 billion in total bets while their revenue was $145 million. Virginia’s 15% tax on sportbooks applied only to the $145 million in revenue.

Gambling tax revenues also vary by the types of deductions from revenues permitted by the state. Several states permit sportsbooks to deduct the cost of promotions from their revenues before being taxed.  In those states, if FanDuel offers a bettor a free $25 bet, it may deduct that $25 from its taxable revenues even if the bettor loses the free bet.  These deductions can add up; in Colorado, sportsbooks reduced their taxable revenues by 60% due to the many promotions offered to that state’s bettors.  In contrast, Tennessee does not allow deductions for promotions, which along with its higher tax rate is why Tennessee has produced more gambling tax revenue in 2021 than Virginia despite lower sportsbook revenue.

The higher tax revenues in New Jersey and Pennsylvania are not just a product of their larger populations.  Sports gambling is more developed in those two states, having existed in some form since 2018.  Tennessee and Virginia’s sportsbooks are much younger, with those states first offering legal sports gambling less than a year ago. New Jersey benefits from the fact that neighboring New York and its huge population does not yet offer on-line wagering (although it will shortly).  Pennsylvania benefits from one of the highest sports gambling tax rates in the nation at 36%.

Given its population, North Carolina likely could generate sports gambling revenues at least as strong as those in Tennessee and Virginia if the state should decide to permit on-line wagering and to levy sports gambling taxes in the 15-to-20% range.  A study commissioned by the N.C. Education Lottery in 2020 predicted that tax revenues from on-line sports gambling would total around $35 million annually after a few years of operation. That figure would be roughly equal to the 2021 projections for Tennessee and Virginia. Our state would likely exceed that projection if it adopted a tax rate closer to Pennsylvania’s.

While the state might earn millions of dollars from on-line sports gambling, the same can’t be said about North Carolina’s local governments.  Our state’s cities and counties would not see much of a financial benefit unless the General Assembly were to get creative with its taxation approach.

Outside of property taxes, existing North Carolina law offers no avenues for local governments to tax sportsbooks or their revenue. One option would be to create a new revenue stream for local governments from a sports gambling tax as was done in Pennsylvania. Two percent of Pennsylvania’s 36% gambling tax is designated as a “local share assessment” and must be used to benefit the state’s cities and counties.

If the bill becomes law, between 10 and 12 on-line sportsbooks would be permitted to operate in the state. Physical sportsbooks (beyond those already operating on tribal lands) would be permitted only in connection with “sports facilities,” defined as stadiums or arenas with capacities of at least 17,000 and golf tournaments that attract at least 50,000 spectators. (You can see a list of all North Carolina sports facilities and their capacities here.)

S.B. 688 would levy a tax on sportsbook revenue of 8%, a rate well below those of neighboring Tennessee and Virginia. It would also allow sportsbooks to deduct from their taxable revenue the cost of promotions. As a result, the bill’s fiscal study estimated sports gambling tax revenues would be only $24 million annually. (Proponents of S.B. 688 appear open to raising the bill’s proposed tax rate to generate more revenue for the state.) Each year, $1 million of gambling tax revenue would be spent on gambling addition prevention and treatment programs. Of the remaining revenue, half would be used to attract major sporting events to the state while the other half would be unrestricted state revenue. The bill does not provide any local government revenue options.

In addition to the annual tax on gambling revenue, on-line sportsbooks operating in North Carolina would be required to pay license fees of $500,000.  License renewals every five years would cost $100,000.  These license fees would be substantially less than Tennessee’s but roughly equivalent to those in Virginia. (See table above.)

First, keep in mind the size of our state’s budget. Governor Cooper has proposed spending $27 billion for 2021-22.  Even if North Carolina sports gambling tax revenue were to hit $100 million annually—more than twice what Tennessee and Virginia are earning—that would represent less than one-half of one percent of total state spending.  Second, legal sports gambling carries significant potential harm to state residents.  The well documented risk of gambling addiction is heightened when you can place a bet with a simple tap on your smart phone. Third, taxes on gambling seem to hit low income residents harder than more well off residents; regressive taxes such as this one are generally neither popular nor considered good policy.

Given these concerns, there is no doubt that many people will reach the same conclusion as did the editorial board of the Raleigh News & Observer: “Legalizing sports wagering in North Carolina won’t generate enough revenue to compensate for its potential damage. It’s a bet North Carolina can’t afford to make.”

Nevertheless, my bet is that sports gambling will follow the same trajectory as did the North Carolina lottery fifteen years ago: promises of financial gain; strong objections; lengthy debate; eventual adoption. But then again, you probably shouldn’t take gambling advice from a guy who was certain that the Blue Devils would stay within three touchdowns of the Tar Heels this year.