On March 10, 2020, North Carolina Governor Roy Cooper issued Executive Order 116, which declared a state of emergency in North Carolina due to COVID-19. At the time, state and federal authorities had no idea how long the COVID-19 pandemic might last, so most measures in those far-gone days were meant to be temporary.

In addition, millions of North Carolinians (and other Americans) staying home had rather significant short-term effects on the state’s economy. As a result, the General Assembly passed Session Law 2020-3 to relieve some of the economic pressure created by the pandemic. Section 4.40 of this law extended the term of most development-related permits in the state that were current and valid between March 10 and April 28 of 2020. As the pandemic evolved, the legislature reacted with a second and a third permit extension. Each of those extensions is discussed in this blog post.

On July 11, 2022, Governor Cooper’s office published a press release announcing that the statewide state of emergency will end on August 15, 2022.

Length of extensions: Where we are now

Following the third and final permit extension—Section 2.21 of Session Law 2021-3—any development approvals (and associated vested rights) that were current and valid between September 2, 2020 and 30 days from the lifting of the state of emergency are extended until 150 days from the date that EO 116 is lifted. Some of these development approvals were only valid after September 2, 2020, because they had already been extended by S.L. 2020-3. Since the third extension was enacted, many local governments and development-related practitioners have wondered how long the extension might last.

A quick note on interpretation: the third extension states that qualifying development approvals are “extended until” 150 days after the end of the state of emergency. This language was presumably chosen over something like “will expire on” to clarify that it only lengthens development approvals that would otherwise expire before January 12, 2023, and does not cut short approvals obtained before September 14, 2022, that remain valid past January 12, 2023.

Which approvals qualify for extension

“Any of the following approvals issued by any unit of local government, regardless of the form of the approval, that are for the development of land:

As one can see, most erosion and sedimentation control plans, plats, site-specific or phased development plans, or building permits were extended by permit extension legislation. The approval extensions specifically did not apply to contracts with third parties or to most approvals issued by federal agencies, and the extension could be terminated if the permit holder stopped complying with applicable law or let performance guarantees lapse.

if there is a question about whether an approval is “for the development of land,” S.L. 2020-3 Section 2.21 defines “development” as “[t]he division of a parcel of land into two or more parcels, the construction, reconstruction, conversion, structural alteration, relocation, or enlargement of any building or other structure or facility, or any grading, soil removal or relocation, excavation or landfill, or any use or change in the use of any building or other structure or land or extension of the use of land.”

What it all means

For development approvals that meet the definition in S.L. 2020-3 and do not fall under any of the exceptions described above and in the various bills, the end result of the effects of the various extensions and the lifting of the state of emergency are as follows:

First, development approvals that expired March 9, 2020, or earlier did not qualify for an extension. An approval had to be current and valid on March 10, 2020, or later. There is also a narrow window of development approvals that qualified for the first permit extension in S.L. 2020-3 § 4.40, but that expired before they could qualify for the second extension in S.L. 2020-97, § 3.21. These had expiration dates between March 10, 2020, and April 1, 2020, and expired five months after their original expiration date. In order to qualify for the second and third extensions, a development approval had to be current and valid on September 2, 2020, or later. Development approvals that would have expired between September 2, 2020, and September 14, 2022 (30 days after the state of emergency is lifted), all now expire 150 days after the state of emergency will lift, which is January 12, 2023. Note that the third extension applies to permits that are “current and valid” as of September 14, 2022, so permits that would have expired after September 14 may have been valid on that date, which would qualify them for the extension until January 12, 2023.

These scenarios are summarized in the table below: 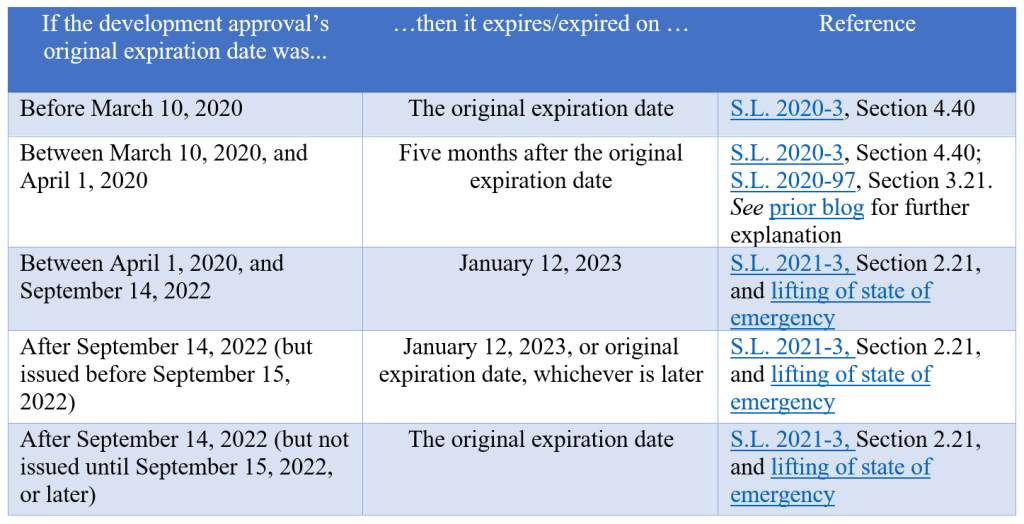